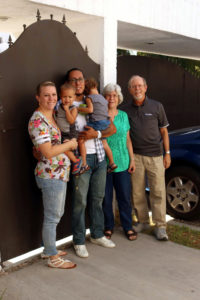 We praise that Lord that Dan and Oscar drove the 2000 miles from Elkhart in a van with trailer to Queretaro, Mexico with only a couple of problems. When they crossed the border, Dan and Oscar had unload about half of the trailer and pay more than expected to enter the country. Later on the trip they took a detour recommended by the GPS and toured some parts of Monterrey, Mexico, that they would have preferred to avoid. But in the end, they made safely to Queretaro on the evening of July 19th. Barb, Jenny, and our two grandsons flew down the next day later giving Dan and Oscar time to get their new house prepared.

You can read about Jenny and Oscar’s ministry at https://oscarjenny.com.