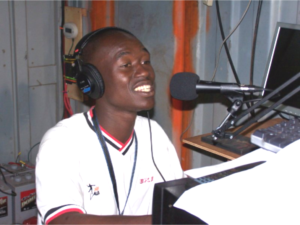 God is at work through the ministry of Radio Fidelite, a partner station located in Niamey, Niger. One of the radio announcers visited the nearby villages to meet with listeners. On one trip he was asked to bring some things to the village. The requested items included mosquito nets and some SonSet® solar-powered radios so the people could listen to Radio Fidelite.
On a return trip to the same village, the announcer was confronted by a group of 100 angry men who wanted him to take the nets and radios back. This group also threatened him with bodily harm. He responded saying: “I know who the one is in you who is fighting against me. And I know the One in me who is able to protect me. There is nothing you can do to me! And I cannot fight against you because the One in me has tied my feet and hands so I cannot fight you.” At that the angry group left, allowing him to leave their village untouched.
A second nearby village heard about this incident and the village imam (Muslim priest) invited the announcer to come visit them: “We want you to come to our village and start a church. We now know that if Jesus is the One who caused you to respond the way you did to those who wanted to take your life, then we want what you have!” The announcer has visited that village several times since then to share with them about God’s indescribable gift; he hopes to start a church there soon. (story by Kevin Mayer)
“Thank you” to everyone who supports SonSet Solutions and our ministry for the part you have in making God’s gift of salvation known throughout the world.