In 2007, when Dan and the team from HCJB Global were in the Central African Republic, installing a satellite system to receive Christian French programming from TWR to be broadcast on the local shortwave station, they were unable to receive a signal from the TWR satellite. 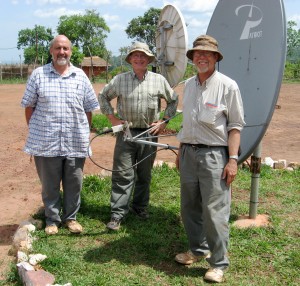 Now, three years later, our team was struggling again for days trying to receive the TWR signal, yet without success. After much prayer, on the last day we could work, the receiver locked onto the satellite with a clear signal in French. We believe that the Lord was teaching us to depend on Him in everything.

We are praising the Lord that ICDI will now be able to use the French programming as they increase broadcast hours with the new station.