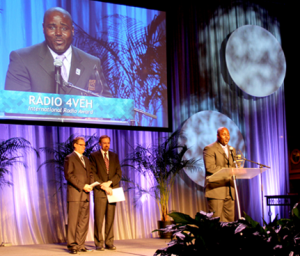 As a young boy growing up in Haiti, Storly Michel knew one thing when a certain Christian program concluded each day on Radio 4VEH; it was time for him to start walking to school in Cap-Haitien.

The station, established in Cap-Haitien in 1950, is a ministry of One Mission Society. Broadcasts are in Creole, French and English. Ten years ago HCJB Global engineers helped Radio 4VEH launch a satellite network with FM downlink stations in Haiti (La Tortue Island, Pignon and Dèyèmon), adding to its existing AM and FM stations. The mission also provides ongoing technical support for the satellite network as well as FM transmitter maintenance for Radio 4VEH and its affiliates.